The Sacred Ambondrombe Hill in Madagascar 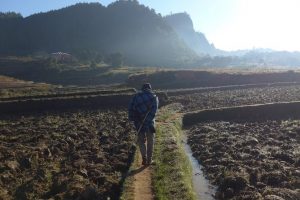 The Ambondrombe Hill in Madagascar has been described with several mysterious titles including “the abode of the living dead” which is a famous title given to it due to the belief that spirits are active there, with tales of them singing, dancing or chanting. This article will explain more about the mysteries surrounding the Hill of Ambondrombe before visiting the actual location.

Ambondrombe lies in the Matsiatra Amboy area, in the community of Ambohimahamasina, Madagascar. The Ambondrombe Mountain,  and surrounding areas, are well known for the community’s strong spiritual beliefs, folklore and reported sightings of spirits.

The successful growth of the Ambondrombe hill is attributed to two men, Rasool Germain, an intelligent community leader and Dada Lapierre, a distinguished spiritual leader, and defender of the holy mountain of Ambondrombe. These two city leaders, who came from very different backgrounds and perspectives, had similarly strong beliefs and came together to organize the community. The two leaders started and led a local change process through a confluence of modernity and tradition. Taboos, tributes and presents to forefathers, and religious prayers for permission were sent to the mountain and woodland spirits.

These expressions of reverence revealed a strong link between both the natural and spiritual worlds.

Interesting Mysteries about the Ambondrombe Hill of Madagascar

Elders created the belief that Ambondrombe was the mystical and enigmatic sanctuary of their forefathers’ spirits and for this reason, a portion of the mountain has remained untouched for years. People who have climbed the sacred site of Ambondrombe have visited the Ambohimahamasina area, a magical peak steeped in myths that it is the burial ground of the Malagasy people’s souls after death. A large hill, according to the Hovas of Madagascar, is also home to the spirits of men and creatures. These spirits are occasionally seen walking around offenders’ tombs and execution sites.

Ambondrombe is unique in that locals think that the summit of the hill is home to the souls of the dead and this is where the name “abode of the living dead” seems to come from. From live witness accounts of people living around, there are audible voices, the sound of singing voices, yelling and many other sounds that could be heard from the mountainside at night. Those who live around this area have a different practice of burying their dead. They do not dig graves but put them inside cave-like rocks and cover them.

Individuals have attempted to dispel the story of Ambondrombe by climbing to the peak of the mountain to witness what they hear for themselves. Once, a well-known journalist by the name Latimer Rangers, who has toured most of Madagascar, attempted to debunk the Andrombombe tale by ascending to the peak of the ridge with the support of local locals and capturing the sounds. After verifying that there are nightly noises on the hill, as reported by residents in Ambalavao’s market, he tried to record the sounds and broadcast them on the radio. He was not afraid but his companions were afraid and could not continue the journey with him. He stated his aim clearly as that of broadcasting the sounds made by the ghosts on the radio.

Ambondrombe is one of Madagascar’s most intriguing locations and is one of the few places in Madagascar where vegetation is not disturbed. Superstition, paranormal activity, or rationally unexplainable have also drawn the attention of several researchers and those interested in spirituality.